26 Years of In His Steps 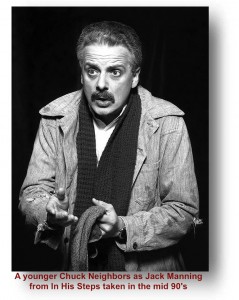 What comes to mind when you hear or see “WWJD?,”  the now famous acronym that stands for “What would Jesus do?”  The question was the focus of Charles Sheldon’s classic, In His Steps, written back in 1896. It has been popularized in recent years, showing up on bracelets, bumper stickers, tattoos, and a whole host of magazine articles, songs, and books.  The question, once meaningful to many, has become a fad and been trivialized and even mocked.  That’s what happens when something becomes a part of popular culture. Many who use the acronym have no idea of its origin.

Since 1984, long before WWJD? became a fad, I began performing my adaptation of In His Steps.  The story is a powerful one, and proves its status as a classic over and over again.  I have been amazed at the number of people who have shared with me how the book and/or my presentation of it, has impacted and even changed their lives.

The book has always had its critics.  When it was first published, it was unpopular with more conservative evangelicals who labeled it “social gospel.”  In more recent years, it is  commonly embraced by evangelicals and often criticized by the mainstream as being too simplistic or dogmatic.

After performing this play for 26 years and well over 1,000 performances, I have considered retiring the show.  I sometimes think maybe the story has lost its place, its relevance to today’s audiences and the church.  But just when I begin to think those thoughts, I get a wake up call.  It seems the story still has a place, still needs to be told. For the last couple of years, I have been performing my newest drama, Not The Way I Heard It, almost exclusively.  Being new, it has been easy to promote that presentation over my others.  In His Steps sort of got pushed to the proverbial “back burner.”

Over the last two weekends I have performed In His Steps again.  After one performance a man shared how he has been considering becoming a pastor.  He said the play had been a confirmation to him that he was to “accept the call.”  Then last weekend I received a standing ovation from a congregation of about 300 in a Sunday morning worship service.  That doesn’t happen very often.  In addition 19 children were sponsored after the service with World Vision. It seems that God was doing something through this story yet again.

Over the years I have been privileged to see how stories can impact and move people.  This story, in particular has been an instrument to challenge and change thousands of lives.  I am privileged to continue to share it and see how God uses art, story, and performance to draw people to Himself.

What would Jesus do?  This actor, for now at least, will keep performing this play and encouraging audiences and individuals to ask that question for real in their lives.