Does Anyone Care About Art in the Church? — Part One

“Chuck, I’m sorry but I just have no vision for this.” 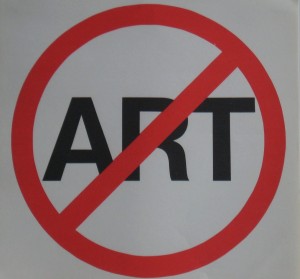 I looked across the table in the coffee shop into the eyes of the church worship leader, trying to understand.  Trying but failing.  He was the worship leader of a good sized church (over 700 people on an average weekend). I had been asked by the senior pastor to assist the church in starting a drama ministry.  The pastor had the vision. I had met with the group interested in doing drama at the church—over 20 adults—a great start! Yet the one person who should have been the champion of the cause, the go-to person for artistic endeavors in this congregation, was telling me he had no vision for it.

And really, that is almost the end of this story… the ministry never really got off the ground. Oh, the team met, developed material specifically targeted to the pastor’s sermon, and the few times they performed it was well received—the pastor and the congregation wanted more.  But the worship leader had no vision for it and pretty much single-handedly killed it.  When a drama was scheduled, he would roll his eyes and complain about the hassle it would be to make room on the platform for the scene to be performed, or the extra chorus that would have to be cut in order to allow for the drama.  Being the gatekeeper of the arts in this church, he was able to foil the attempts to grow the ministry.  Opportunities became less and less frequent.  Performers became, understandably, discouraged when not allowed to perform. The drama ministry died.

And it wasn’t only drama, for a church this size the number of musical artists allowed to share their gifts was extremely limited. Only a hand-picked few were given opportunity to perform and use their gifts in the church.

I wish I could say this was an exception, not the rule, but sadly I have seen this scenario repeated at a number of churches. By and large I fear that most churches are not a very welcoming place for the artists in the congregation. Why is this the case?

In my example above I think it was a combination of ego, insecurity, and control for the worship leader in question—a pitfall for any person who is the single gatekeeper for everything artistic in a church. He knew one area of the arts well—contemporary  Christian music—and anything other than that was outside the box, and possibly considered a threat.

The other side of the coin is the church that really has no one to turn to. Often smaller churches have a perceived void when it comes to things artistic.  They may not have a paid worship leader and are at the mercy of whatever volunteers they can find to lead music during a worship service. A gifted artist may be hiding in the congregation and not willing to be discovered either for fear of being over-used or for not wanting to be associated with what they consider sub-standard performance.

So okay, I have laid out the problem… but some may be saying “why should we care” and “does all this arts stuff really matter”?

You can probably guess some of my response to this… me being an artist after all.  I plan to give a few of my thoughts in Part 2 of this blog… but I would love to hear your response.

Why should we even care about arts in the church?  Is it really that important?