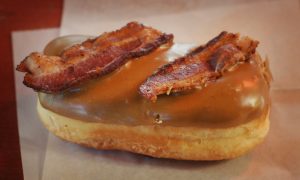 So, I was at this church and they were having what they called a “Ministry Fair.” All of the different ministries of the church set up tables in the lobby. The idea was for you, the church member, to see all the possibilities and then sign up to be a part of a ministry of the church. There were all the usual suspects: women’s ministry, men’s ministry, youth and children and nursery, and various mission outreaches. But I knew which ministry I would want. It was the first thing that caught my eye when I walked into the church. Donuts. If God called me to this church and gave me a ministry here I am pretty sure it would be someplace near this little stand in the corner where they were brewing fresh coffee and serving up donuts. Now here is a church that is practicing for heaven!

Has it ever bothered you that for all the stances the church takes on living the Christian life, the one area that many seem to overlook is healthy living when it comes to diet? I mean the church may have a Celebrate Recovery ministry, and even a health and fitness ministry, I was at a church recently that had a Pastor of Sports. Yet on Sunday morning they serve up donuts, alongside a healthy dose of caffeine. I grew up in the era of the church potluck. Fried chicken and casseroles, and lots of cake and pie! As one church lady righteously defended, “but there are no calories, I followed the recipe exactly, calories were not on the list of ingredients.” The church potluck, how I miss it. It doesn’t seem to be a thing, like it was when I was younger. Maybe that is a good thing. With so many states now making cannabis legal, the potluck might need to be redefined.

But hey, I am not here to judge…I think I read somewhere that that is a sin.

But donuts! I walked by the donut booth and took a peek at the signup list. Looks like this ministry might be overbooked. I grabbed a maple bar and chatted with Scott who was overseeing the signups. Scott heads up this ministry and it turns out is in law enforcement. Why am I not surprised?

Man, this maple bar is especially good; suddenly I know why, it’s the bacon. Yes, this is no ordinary donut (I should have noticed the pink box when I approached the table). This is a Bacon Maple Bar. I am in Portland, Oregon after all and the donut I am eating is a Voodoo Donut. Voodoo Donuts is one of the things that put Portland on the map. I fly a lot and it seems on every flight someone is carrying that signature “pink box” full of donuts home with them.

I am pleased that I selected this maple bar. At least I can now say that I had a healthy breakfast. I have grains, I have protein. Maybe there is more to this ministry than I previously thought.

I wonder if anyone is bothered by a church knowingly serving up something named Voodoo. I mean I am all for various elements of the faith community learning to get along with each other, but embracing Voodoo is stretching it a bit. I wonder if there is an aspect to this I am not seeing. I suddenly envision people with little dolls representing the pastor, hiding in their pockets and purses. If the sermon gets too long and people are craving their donuts, the pins come out.

There may be more to the donut ministry than I ever realized before.