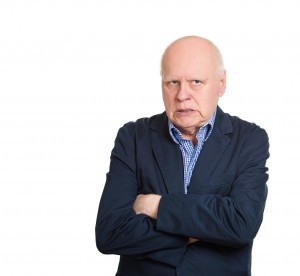 “That guy is full of beans!”

I noticed the man as I took the stage for my presentation of Truth be Told…from a Guy Who Makes Stuff Up. He sat in a pew all to himself three rows from the front.

Being in theater and in the field of communication, I’ve learned to home in on body language and this man was demonstrating the classic closed position. Body angled away—if he could have found a way to sit sideways in the pew he would have. The few stolen glances I had from him were what I would classify as scowls.

For the most part, church audiences have been pretty safe for me. The audiences are generally polite and welcoming. Nothing like what I experienced years ago when doing the school assembly circuit and performing for a gymnasium full of hostile junior high schoolers. Those audiences you had to win over, and if you didn’t, they could eat you alive. I have often said performing in school assemblies was like being fed to the lions. This gentleman, though a senior citizen, was displaying the same “prove it to me” attitude that I experienced in those junior high schools. I registered it in my brain and moved on. I had an audience to play to and I wasn’t going to let one man’s negativity keep me from doing my job. I would ignore him. The show must go on!

Ignore him I did, and aside from this man, felt I had a good connection with the rest of my audience.

After the service I ventured into the fellowship hall for refreshments. As I headed for the table the man approached me with his hand outstretched.

“I have to tell you that when you started your presentation I didn’t know what to expect. I certainly didn’t think you were going to be doing the entire service. I decided shortly after you started that ‘That guy is full of beans!’ I almost walked out. But then the more I listened I got pulled in to your story. Then I realized I was being an #$%^&*~!” That was really good what you did.”

Rarely do I get such honest feedback from an audience member. I don’t think an audience member has ever said I was “full of beans” to my face before (and I am pretty sure he only said “beans” because he didn’t want to say another more common word associated with that phrase).   And yet he didn’t hold back on his language when describing himself with an expletive. I am sure he is voicing what many others have thought over the years but never would have expressed to my face.

And yet, in talking to him he affirmed that it was in connecting with my story that his defenses went down. Whether it was some of the humor that he identified with or an episode from my life that mirrored his, I don’t know. But somewhere in the course of hearing my story he connected—he began to listen and engage and in the end he felt a bond with me, because of my story.

Many places receive a freewill offering for my ministry after the performance. As my visit with the gentleman came to a close he said: “I’m not a rich man, don’t have much, but I want you to have this.” He pressed a $20 bill into my hand.

What a great reminder of the power of story. Each of us has a story to tell. May we learn to share it knowing that in the sharing there is great power to connect, challenge and encourage others.

So what’s your story?