Being an itinerant performer in ministry, I have been in literally thousands of churches during my 37-plus years of touring. I have been in churches of just about every size and flavor and most of the time I know what to expect when I show up to perform at a church service. However, if there is one area that can be the most unpredictable, the most uncertain, it is in performing comedy. I have learned that comedy is subjective and what can be rolling in the aisles hilarious to one audience can elicit nothing but crickets from another. I have learned from personal experience that comedy quickly turns to tragedy when nobody laughs—so I approach each of these performances with a bit of cautious anxiety. 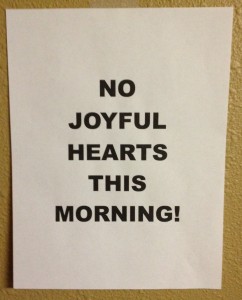 While comedy is not typical fare for a worship service, often a church will invite me to perform my comedy, The Sacred Diary of Adrian Plass, for their worship service. It is humor with a purpose and in the right setting, the message can be profound to the listener.  The humor is medicine that heals the soul. But comedy in church, for some, is a bit of a stretch.

My nervousness was heightened at one church where upon arrival I noticed posters publicizing my performance and right beside each one was another poster which read:  “No Joyful Hearts This Morning.”  I was having a minor panic-attack.  I was sure I explained to the pastor that this was a comedy I was performing. And what kind of church would tell people to attend joyless?… I mean, I have been to several where I would have suspected that was the case, but to advertise for “No Joy” was a first!

Can you imagine what other guests might be thinking as they encountered those signs?
As the saying goes, “many a truth is said in jest,” and I wonder how many churches and individuals send out that very same message by how they approach and participate in church every week.

A friend of mine tells of a similar experience where he was performing a comedy in a church and no one was laughing.  He was dying on stage and couldn’t wait to leave not only the stage but the church.  After the performance one man said to him: “That was the funniest thing I have every seen… it was all I could do to keep from laughing out loud.”

Can you laugh out loud in your church? Is your church a place of joy? Got a funny story about laughter in church?