I love observing people.  It’s part of the job of being an actor.  You become a student of human behavior. 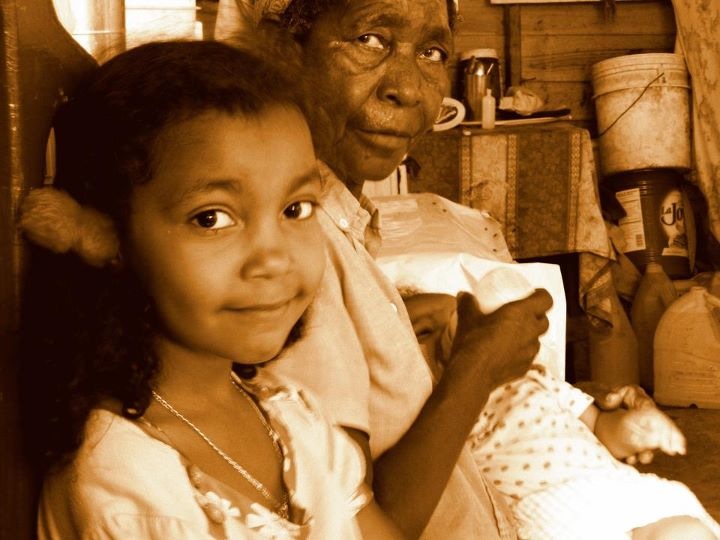 Mari Luz and her Great Grandmother in The Dominican Republic. Mari is one of the children we sponsor through World Vision.

I enjoy working in partnership with World Vision, and have discovered the table where I display all of the children who need a sponsor is a great place to observe people.  I try to figure out ahead of time who will be the ones to sponsor a child. You learn to read the signs. Some people avoid eye contact. Some pass by with only a glance. Sometimes they linger and pick up the folders and read more. Sometimes they ask questions. And sometimes they cry.

There was a young woman at a recent event who desperately wanted to sponsor a World Vision child. She lingered, picked up a picture of a child and cried.

I asked if everything was okay.

She told me that this child’s birth date was the same as her anniversary. She wanted to sponsor, but was uncertain because she is in a job transition and not sure she could afford it. She took the folder and went off to speak to her husband. The program was about to begin so I left to go backstage.

After the program I am back at the table. I noticed the picture folder has been returned and the young woman is nowhere in sight.  I figured the husband said no.

Then a most beautiful thing happened.  A man approached me and asked if he could sponsor a child for someone else. He said there is a young woman in tears because she wants to do this but can’t afford it. I happily explained that,  yes, there is a gift sponsorship option that would allow for that. The man agreed to pay for the sponsorship until the young couple was able to take it over for themselves.

I observed the reveal as the man shared what he was doing, the look of shock on the young woman’s face, the hugs,  and yes, the tears.

Sometimes they cry… and sometimes I do too.

If you’d like to sponsor a child for yourself or as a gift sponsor for someone else I’d be happy to help you do that.  Send me an email: info@mastersimage.com