Spice Up Your Story 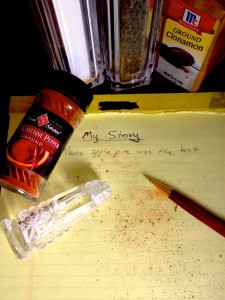 Have you ever heard two people tell very different versions of the exact same story? Happens in our house all the time. I can recount an event and tell it to someone in less than 30 seconds—a “just the facts, ma’am” approach. My wife’s version of the same story might take a good 5 minutes and she will add details that I never noticed; sometimes I am convinced she is making things up.  We remember things differently and when we retell them, our versions are greatly influenced by how the event affected us personally. It might have been no big deal to me but a very significant event for my wife. My version is boring; hers is animated and full of life.

Telling a good story is more than just recounting details and facts. A good story engages the listener in ways they can identify with you and compels them to listen.  Here are 5 tips to help you spice up your story: