At What Cost? – An Update 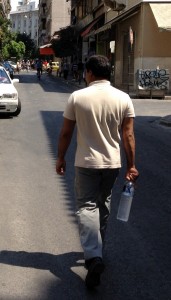 In an earlier post I shared the story of “Rashid,” a Pakistani Christ follower living in Athens, Greece. I just got this update on my friend. I am amazed at his bold faith in the midst of trials.

Arrested by Police and spent some hours in the Police station. I was on a full bus with refuges. A policeman snatched my cell phone and slap me on my face. After checking criminal records I was released, with warning to stay at home do not come out…or leave Greece.  In the police station I shared with two guys about Jesus and Bible, and we pray together.  One of them accepted the message, and wants to read the Bible and be baptized. The other wanted to meet me again and he wanted to ask some questions. Remember me in your prayers.”

Please do remember Rashid in your prayers.  He will likely read this blog, so if you want to give him a message of encouragement, please feel free to do so!

Imagine that those beatings with a plastic water supply pipe were severe enough to be brought to the attention of the police… yet when they were, they were easily dismissed because as a Muslim, this was “a family matter” not a crime at all.

Hard to imagine isn’t it? Yet that is part of the story of Rashid (not his real name), a Pakistani living in asylum in Athens. There is a lot more to Rashid’s story. After being an outcast from his family, seeking freedom and a chance to live his own life, he became one of the thousands of immigrants and refugees who have flooded Athens, where over 80% of the immigrant population of Europe find entry.

Rashid has relatives in Athens and thought he would be welcome here among them, but found out that was not the case. He has been able to find work but has been living as a man with out a country and without a family for the last 7 years.

Earlier this year Rashid became a follower of Jesus Christ. In so many stories of the Christian faith we love to hear this, and anticipate the “happily ever after” summary statement. No question, Rashid’s life is changed, and he has found peace in his heart. A follower who is eagerly sharing his faith with others, including his family. But it is not easy and not happily ever after. 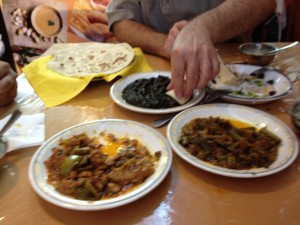 Yesterday we were out in the city of Athens with Rashid. He took us to a Pakistani restaurant, a first for me. I enjoyed the food, but while we were eating government tax officials came in and began inspecting the records of the restaurant owner, at one point even inspecting the receipt on our table. This was just the first glimpse into how the immigrant population is being scrutinized here in Greece, an effect of the economic collapse in this country.

Later in the day while sitting in a public square, plain-clothed police were rounding up immigrants, arresting them and putting them on a bus. While legally in Greece, all of Rashid’s papers were not in order. He has been arrested before, and said if confronted, he would be detained and it would take some time to get everything straightened out. We could sense some uneasiness and quickly moved to another location.

Twice, while riding the subways, Greek men shouted insults at Rashid, one of them even shoving him, all because he is a Pakistani–the message clear, “you are not welcome here.” Rashid is clearly shaken, as are we. And we pray for him… and for his enemies.

Since becoming a follower of Christ, the situation with his family has gotten worse. They are trying various different things to get him to recant his faith. His mother has threatened to kill herself, and his brother is pursuing legal sanction to kill him for converting to Christianity.

Rashid’s response. “I love my family.” He is in communication with his brother and is actively challenging him to read and study who Jesus is in hopes he will also become a follower of Jesus.

Rashid’s story rattles me. You sometimes hear about those things from a distance, living in our Christian bubble… I begin to realize anew how little I have suffered. How little my discipleship has cost me.

I am learning more of what it really means to be a Christ follower from Rashid.

UPDATE! Rashid was recently arrested. Find out what happened in this follow-up.