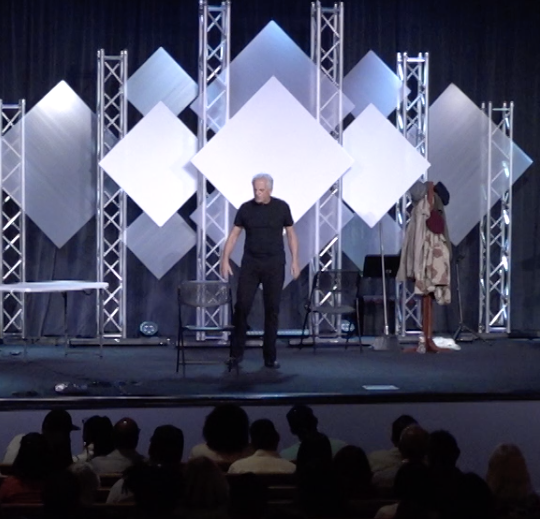 On Palm Sunday it was a privilege to perform to over 5,000 people in three services at a church in the Los Angeles area. It has been a while since I shared with an audience this large and I have to say it was both exhilarating  and exhausting. Three in a row of Encounters, with a lot of emotional characters, takes a toll on the body.

After each performance I was happy to hear some great comments from people that sought me out to compliment my performance. One comment came up more than once:

Their comments were a blessing and a reminder to me of the great gift the arts can be to the church. These listeners heard familiar stories from the life of Jesus told in new and different ways and it impacted them deeply.

The church continues to struggle—or maybe doesn’t struggle enough would be more accurate—when it comes to making room for the arts in the church. The response this last weekend gives me hope that progress is being made in this struggle.

After such a great weekend I was stopped in my tracks when I returned home. A very different response from another church awaited me. A pastor was hoping to schedule a performance this summer; we had the date penciled on the calendar and I was awaiting the formality of an approval from the church board. Then I received this email:

“It is with deep regret and personal disappointment that the Board decided to decline the opportunity.”

I pushed back. Often these things don’t pass the Board because of budgetary reasons. I asked if it was about the money. His response:

“It had nothing to do with money. There was just an expressed apathy. I showed them the clip you sent which I felt was incredibly powerful but apparently they did not share my perspective. I am both puzzled and frustrated. I am sad and disappointed and believe we have missed a wonderful opportunity.”

I am especially bothered by the word “apathy” as the reason. I would be more understanding if it were about the money, or “not appropriate for worship” or even what is even more typical, “we have never done anything like that before.”

Notice how close the phrases are:

The first was an open door that brought new insight and spirtual impact to the listener.

The second is a closed door that resists change and settles for the status quo.

One step forward, one step back I suppose. (Uh-oh, was that a subliminal message about dancing in the church?)