It happens.  Actors, singers, speakers… if you do this work often enough, you will have those moments when the unexpected thing catches you off guard.  Sometimes it’s something totally outside your control, a baby cries, the lights go out, or the elderly man in the 3rd row has a heart attack (true story). The seasoned performer learns to pause or power through depending on the situation. 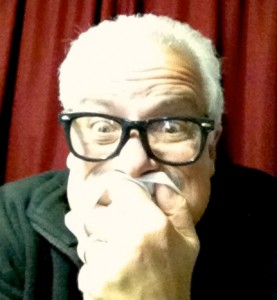 I have a long list of those unexpected moments.  The ones I hate the most however are those moments that are seemingly “in my control.”  This would be the forgotten line (daydreaming again!), the pants ripping out (wardrobe malfunction), or the missing prop (that I forgot to preset on the stage).

I had a new one catch me off guard this last weekend. I was suffering from a bit of post-nasal-drip and was having a hard time getting the voice to work properly—trying to avoid the constant throat clearing that accompanies this annoying little ailment. This is not a new thing for me, and I am used to powering through, and usually find that once I hit the stage and start talking, the symptoms go away… a mystery or a miracle… take your pick.

I’d just begun my performance of Not The Way I Heard It, and was about 5 minutes into the presentation when a bit of “drip” found its way down the wrong pipe. I desperately needed to cough! Being a professional this was a big “no-no” and also knowing that I was wearing a microphone only an inch from my mouth a cough would result in an ear-splitting sound effect that was clearly not in the script.  I tried a muffled throat-clearing and that wasn’t working.  I tried to power through, hoping that by speaking I could clear out the offending slime… All that came out was a whisper of my normal voice… clearly I was in trouble.

Fortunately the scene takes place in a doctor’s office, where I had already established the character as ill (carrying a handkerchief and blowing my nose).  Also fortunately I had water on stage—something I have been doing regularly ”just in case” for all my performances. The acting code requires that you deal with the unexpected “in character,” so I made the character act like he was having hard time speaking (no acting required!), suppressing the cough, I went to the water and drank. It took a few drinks and a few failed attempts at speaking before I was able to get the voice back.  I had to fight the urge to cough for about 10 more minutes into the performance but by God’s grace was able to power through.

After the performance I apologized to a few people for my voice failing me… their response, “I thought it was part of the character.”  Which was the best thing you could have said to me at the time.

What about you?  Do you have a story to share about dealing with the unexpected in front of an audience? Anybody have a cure for post-nasal-drip?