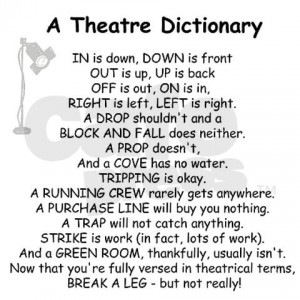 This has been around for awhile (not my original) and thought it might be fun to post it here so we could all share in the fun, the groans, and the “been-there-done-thats.” Enjoy!

ACTORS – People who stand between the audience and the set designer’s art, blocking the view.

ASSISTANT DIRECTOR – Individual willing to undertake special projects that nobody else would take on a bet, such as working one-on-one with the brain-dead actor whom the rest of the cast has threatened to take out a contract on.

BIT PART – An opportunity for the actor with the smallest role to count everybody else’s lines and mention repeatedly that he or she has the smallest part in the show.

BLOCKING – The art of moving actors on the stage in such a manner as not to collide with the walls, the furniture, the orchestra pit or each other. Similar to playing chess, except that the pawns want to argue with you.

BLOCKING REHEARSAL – A rehearsal taking place early in the production schedule where actors frantically write down movements which will be nowhere in evidence by opening night.

COSTUME – An article of clothing which doesn’t fit, smells of mothballs, and is in constant need of repair.

CRITIC – 1) After a rave review, a font of wisdom and authority; 2) After a scathing review, a fool who wouldn’t know if his hair was on fire.

DARK NIGHT – The night before opening when no rehearsal is scheduled so the actors and crew can go home and get some well-deserved rest, and instead spend the night staring sleeplessly at the ceiling because they’re sure they needed one more rehearsal.

DARK SPOT: An area of the stage which the lighting designer has inexplicably forgotten to light, and which has a magnetic attraction for the first-time actor. A dark spot is never evident before opening night.

DIRECTOR- The individual who suffers from the delusion that he or she is responsible for every moment of brilliance cited by the critic in the local review.

DRESS REHEARSAL – Rehearsal that becomes a whole new ball game as actors attempt to maneuver among the 49 objects that the set designer added at 7:30 that evening.

ETERNITY – The time that passes between a dropped cue and the next line.

FOREBRAIN – The part of an actor’s brain which contains lines, blocking and characterization; activated by hot lights

GREEN ROOM – Room shared by nervous actors waiting to go on stage and the precocious children whose actor parents couldn’t get a babysitter that night, a situation which can result in justifiable homicide.

HANDS – Appendages at the end of the arms used for manipulating one’s environment, except on a stage, where they grow six times their normal size and either dangle uselessly, fidget nervously, or try to hide in your pockets.

HINDBRAIN – The part of an actor’s brain that keeps up a running subtext in the background while the forebrain is trying to act; the hindbrain supplies a constant stream of unwanted information, such as who is sitting in the second row tonight, a notation to seriously maim the crew member who thought it would be funny to put real tabasco sauce in the fake Bloody Marys, or the fact that you need to do laundry on Sunday.

LIGHTING DIRECTOR – Individual who, from the only vantage point offering a full view of the stage, gives the stage manager a heart attack by announcing a play-by-play of everything that’s going wrong.

MAKEUP KIT – (1) among experienced community theater actors, a battered tackle box loaded with at least 10 shades of greasepaint in various stages of dessication, tubes of lipstick and blush, assorted pencils, bobby pins, braids of crepe hair, liquid latex, old programs, jewelry, break-a-leg greeting cards from past shows, brushes and a handful of half-melted cough drops; (2) for first-time male actors, a helpless look and anything they can borrow.

MESSAGE PLAY – Any play which its director describes as “worthwhile,” “a challenge to actors and audience alike,” or “designed to make the audience think.” Critics will be impressed both by the daring material and the roomy accommodations, since they’re likely to have the house all to themselves.

MONOLOGUE – That shining moment when all eyes are focused on a single actor who is desperately aware that if he forgets a line, no one can save him.

PROP – A hand-carried object small enough to be lost by the actor 30 seconds before it is needed on stage.

QUALITY THEATER – Any show with which you were directly involved

SET – An obstacle course which, throughout the rehearsal period, defies the laws of physics by growing smaller week by week while continuing to occupy the same amount of space.

SET PIECE – Any large piece of furniture which actors will resolutely use as a safety shield between themselves and the audience, in an apparent attempt to both anchor themselves to the floor, thereby avoiding floating off into space, and to keep the audience from seeing that they actually have legs.

STAGE MANAGER – Individual responsible for overseeing the crew, supervising the set changes, babysitting the actors and putting the director in a hammerlock to keep him from killing the actor who just decided to turn his walk-on part into a major role by doing magic tricks while he serves the tea.

STAGE RIGHT, STAGE LEFT – Two simple directions actors pretend not to understand in order to drive directors crazy. (“No, no, your OTHER stage right!”)

STRIKE – The time immediately following the last performance while all cast and crew members are required to stay and dismantle, or watch the two people who own Makita screw drivers dismantle, the set.

TECH WEEK – The last week of rehearsal when everything that was supposed to be done weeks before finally comes together at the last minute; reaches its grand climax on dress rehearsal night when costumes rip, a dimmer pack catches fire and the director has a nervous breakdown. Also known as hell week.

TURKEY – Every show with which you were not directly involved

Got another one?  Love to have you share in the comments below!