The Tooth be Told 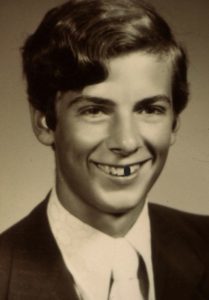 He was a bully with a big mouth. The kind of guy that hung out with the jocks and the cool kids—wanting to be one, but wasn’t. Looking back, I can see that he was insecure and like everyone else in junior high, trying to find a way to fit in. His way to was to put down those he perceived as lesser than himself. His name was Miller, I don’t recall his first name. In junior high everyone was called by their last name.

I was Neighbors, and for some I was also called “Farmer.” It wasn’t a compliment. I acquired the name because of my shoes. My parents didn’t care about fashion or the latest styles in 1968. My clothes were practical, not stylish and were bought at K-mart. We lived on a farm and the shoes they bought me also doubled as work boots. Perfect for the farm, not so perfect for school. One day one of the cool kids noticed my shoes and called me Farmer. It stuck.

I was quiet, definitely not a jock, didn’t have many friends—I was not one of the “cool kids.” If Miller was looking for a way to prove himself a tough guy, then I was perfect prey.

The lunch routine in junior high was to gather in the gym and then, at regular intervals, we would line up single file to go to the cafeteria when it was our turn to eat. I took my place in line on this day, as I had on so many other days. Miller would often “take cuts” as we called it—jumping into line in front of others to go first and/or to be near the other “cool kids.” He had taken cuts in front of me before and it angered me, but I didn’t know what to do about it. I knew that simply tattling would not accomplish anything and only make things worse.

I hated being bullied. I played by the rules. Growing up with two older brothers, I quickly learned my place when it came to getting along with others. I was not the assertive one. We were taught that fighting was wrong. My brothers would tell you that I was quick to yell for mom and dad to come to my rescue when we had scraps at home. But I also recall some fatherly advice my dad had given me about fighting. “Sometimes you have to stand up for yourself. If people know you you’ll stand up for yourself, they won’t bother you anymore.” My dad was a short man, and somehow I got the feeling he had personally applied that wisdom somewhere in his history.

So Miller cut in front of me. I don’t know what made this day different from all the other times he had taken cuts, but I snapped. I wasn’t having it today. I yelled “No cuts!” and shoved him hard out of line. Miller was momentarily stunned; he wasn’t expecting this. He spun around and  charged at me.

Now, one thing you need to understand is that while I was not a jock, it doesn’t mean that I didn’t have physical ability. I had never had a real fight before. But I had had countless “fights” in my make believe world. I was a fan of old action movies. I had pretend fights galore, emulating fights I had seen in countless movies. And I don’t know where they came from, but we had old boxing gloves in our house. While I had never taken a lesson, I had watched Mohammad Ali on TV.  I had had numerous boxing matches with my brothers and cousins in the basement of our house (we almost always pulled our punches—almost always). I had the physique of a toothpick, which meant I was not very strong, but I could move pretty fast and was a small target.

When Miller charged me I immediately adopted a boxer stance and began to dance around just like the boxers I had seen on TV. All of the sudden I was Muhammad Ali. I was “floating like a butterfly.” I quickly dodged his charge and then went on the attack, jabbing with my fists. The word “fight” was chanted from my fellow students as they backed up forming a ring and giving us space. I recall a few snickers at my fighting style. This was not what was typical of a school fight, which usually resembled more a wrestling match than a boxing match.

I peppered Miller with several blows. Mostly to the head. I was pumped on pure adrenaline. He was hardly fighting back and mostly trying to cover his head to protect himself. Then from out of nowhere he mustered a wild punch. It connected. Right square in my mouth. Okay a point for Miller. I backed away stunned for a moment and then started another advance.

“He’s bleeding!” “Look at his tooth!” “Hey Neighbors, you lost your tooth!”

What? I hadn’t realized it.

One of my front teeth was knocked clean out of my mouth and was lying on the floor at my feet.

Suddenly the fight stopped.  A missing tooth and the blood dripping from my mouth brought everything to a momentary halt. Then adults were on the scene. Somebody picked up my tooth off the floor and Miller and I were being whisked down to the principal’s office.

As we walked down the hall Miller was in a panic and said to me. “I can’t be in trouble for a fight. I’m already in enough trouble. I’ll get kicked out of school. Tell them you accidentally tripped and fell into the bleachers, okay?”

I tried to respond, “I uhhh woon oooh ahh”

I couldn’t talk, I had a hanky in my mouth and I was bleeding profusely.

When we got to the office. Miller told his side of the story, while I sucked on a handkerchief and waited for my dad to come and pick me up. Miller’s story was the official story of the incident. I tripped and fell into the bleachers and knocked out a tooth.

I was taken immediately to the dentist, whole tooth in hand. They attempted to implant the tooth back into my mouth. I took a few weeks before we realized the tooth didn’t survive. I would live most of the rest of my life with a “flipper,” a false tooth on a partial denture in the roof of my mouth. A false tooth as a permanent reminder of this infamous day.

I’d like to say that I won the fight. I hit Miller numerous times and gave him a slight black eye. He only hit me once…but what a hit. Miller and I would see each other again from time to time, but we kept our distance from each other. He did the most damage in the fight. I’m sure he thinks he won.

My Dad was right, however. Throughout the rest of my junior high and high school years the bullies never bothered me again.

Miller’s lie stuck. If there is one thing that bothers me most about this story, it is that I never corrected the lie. Oh, the students that witnessed the fight know what really happened. But for some reason I kept my mouth shut. I had to when the lie was being told. I couldn’t talk and was just a little in shock. By the time I could tell my version of the story, my parents and the principal had all accepted the other version. I tripped, fell into the bleachers and knocked out my tooth. I perpetrated the lie to those who knew my parents because it was easier than telling the truth, or so I thought. My parents went to their graves not knowing the truth of what happened, and I regret that.

And the ironic thing is that I actually prefer the true version of the story. Me standing up for myself. And I did offer up a great defense…except for that one lucky punch. I think my dad would have been proud.

A little late perhaps, but the truth must be told, and I feel better for telling, even if a bit late!