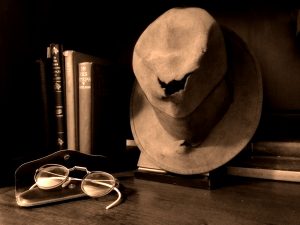 This old hat sits in display on a bookshelf in my office. What comes to mind when you look at it? It is pretty beaten up and worn. If a hat could talk I am thinking this hat might have a terrific story to tell. Which is one reason I chose it. I was looking for a hat with a story to tell.

At one time it was actually a pretty good hat. The label on the inside says it’s a Dobbs hat. Dobbs hats date back to the 1930s and the company is still in business today. I was actually looking for something that went back even farther—the 1910s would have been ideal. But for the story, this one would work fine. I found it at a thrift store in the 1980s. When I found it, it was a little too nice. I needed it to look like a hat that had been to there and back. A hat that had experienced all kinds of weather. A hat that had slept in the streets and maybe been kicked and punched a few times.

So I worked it over a bit. I wadded it up and stomped it in the dirt until it had the look I needed—a hat that had once been distinguished, now beaten, faded and tired. A hat with a story.

At that time, in the 1980s, it didn’t have any holes in it. Those came later. The holes appeared after telling the story hundreds of times. I would tell the story while holding the hat in my hands and fidgeting with it. That, combined with being thrown in a suitcase until the next time I told the story, eventually wore holes in the hat. Small at first, but becoming more pronounced over time.

Soon it reached a point where it was too worn and too fragile to withstand the rigors of the storyteller. I feared it might disintegrate in my hands if I were to keep demanding it to perform. I needed to replace it, to recast the role of the hat with a different old hat.

So I did. I went to another thrift store and found another old hat. This one was a different style but still appropriate to the time for the story. It would work, and has been my companion for telling the story for many years. But it is not the same.

I miss this old hat.

We shared so much time together. This old hat became not only part of the story I told, but part of my story too. This old hat is linked to a lot of memories. Cherished memories that I don’t want to forget.

So I keep it around, letting it occupy a place of prominence on my bookshelf, where I can see it often. It still serves a purpose. It reminds me of the journey we have had together. Of the stories we have told. It has become a part of me.

I’m just not ready to give up this old hat.