When the Story Really Hits Home

In my world as a itinerant artist, you often wonder if what you are doing really makes a difference. You get a lot of “good job,” “how do you remember all those lines?” and “thanks for sharing” comments. But rarely do you get to hear a real story of a life truly impacted or changed through the ministry/art that you present. But every once in a while you get a glimpse, a story comes back to let you know that something tangible happened.  Such was the case at a performance of In His Steps in Arizona earlier this year. Writer, Tarina Lovegrove wrote about a performance she attended that was featured in Hometown Christian Magazine. I have included a portion of the article as a guest blog. Thanks Tarina!

Are we at church or at a grand theater?  It was truly hard to tell.  I was so blessed the day Chuck Neighbors visited my church and performed a one-man show entitled In His Steps for our small congregation. 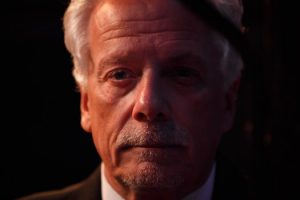 For so many of you who were not at the service that day, you really should visit www.mastersimage.com and try to catch the amazing performance that was showcased that fine Sunday morn.  If you’re like me, you’ll be blessed beyond measure with his example of the impact of having Jesus in your heart and what it can do for your life, your community and our world.

The first scene opens with Mr. Neighbors singing “I Can Hear My Savior Calling” as he begins his narrative in a role as Pastor Henry Maxwell.  Neighbors establishes a solid foundation that sets the scene for the spectacular presentation that followed.

Shortly thereafter, he remarkably remains in character, not missing a beat, adds a wooly red scarf, scruffy jacket and old worn out hat to his wardrobe and literally transforms personas to now represent the second character on set, a homeless man named Jack Manning.

Now, Jack Manning appeared on stage and inherently in front of what was personified as the front of a church, which really hit home for me, as it ironically was exactly where I was seated at the time.

Jack Manning who was poor and quite ill, asked Pastor Maxwell in front of the entire congregation, exactly what did he mean when he said it was important to follow in the steps of Jesus.

The moment was quite fascinating because unbeknownst to me, my attendance at church that day literally transported me to another place and time.  I was not only attending church, I actually became part of the cast of the play without even knowing it.  It was brilliant!

And then it happened… Jack Manning began speaking to the congregation too.  See, his character was a printer by trade who lost his job several months ago and had been brutally struggling ever since.  His wife had died, his little girl was living in someone else’s home for survival and very few people cared enough to provide compassion, kindness or understanding toward the matter.  Life for them it seemed carried on… business as usual.

The insightful Mr. Manning repeated that he was “just stating facts” when he asks his question about what Christians mean by following Jesus.  Through his monologue, Jack Manning revealed there were nearly “500 men, many with families,” in this city in the same situation.

In his heart of hearts, he wasn’t begging for money or support, he was merely trying to understand how Christian people with homes, incomes, money, resources and security could fathom praising the Lord, singing mighty hymns of worship, living lives of luxury and then choosing to turn their heads and hearts when faced with the homelessness and needy population in their very own backyards.

The light bulb illuminated itself even brighter for me when Mr. Manning referenced there might not be as much trouble in our world today if the people who sang these songs also took action to proactively make efforts to eliminate the devastation.

There I sat… dumbfounded, with my heart in my stomach.  Guilty as charged.

There are so many great lessons to learn from this astoundingly heartbreaking yet truthful showcase.   I just don’t know where to begin.

In retrospect, I look at my life and I see the could-ah, should-ah, would-ahs… but that’s not going to get any of us anywhere.  Each of us has the same opportunity, in this very moment, to make a difference.  What will you do?  Make a change or business as usual?

I know what Pastor Henry Maxwell chose to do in the play.  I won’t ruin it for you, I promise.  Watch the play… it’s incredible!  It’s a drama just exploding with a tremendous message that could lead to fantastic impact across our great country, if truly taken to heart.

I know I was completely touched and will not soon forget Mr. Jack Manning, Mr. Henry Maxwell or the real man who brought them and several other great characters to life that day… Mr. Chuck Neighbors.

For details on upcoming events or how you can book Chuck Neighbors for your church or community event, please visit his website at mastersimage.com.  He’s a phenomenal actor, director, storyteller and writer who has traveled across North America as well as 17 other countries around the world, providing thought-provoking material that shares the gospel, touches the heart and with your help, will create a ripple effect of kindness throughout neighboring communities around the world.

Thank you, Chuck Neighbors… for sharing the Word of Jesus Christ!  God bless you, your journey and ministry.

You can read the rest of the feature article here: Hometown Christian Magazine